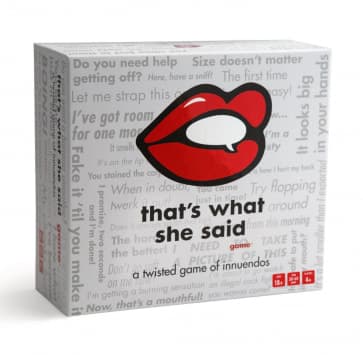 That's What She Said Party Game

That’s what she said, the hilarious party game of twisted innuendos and raucous gameplay where sidesplitting laughter and sip-spitting cocktails is the norm. you may, in fact, wet your pants.

Dispatch Within 24 Hours During Weekdays

6 Month Warranty on All Products

We all say it. Now lets play it.
That’s what she said, the hilarious party game of twisted innuendos and raucous gameplay where sidesplitting laughter and sip-spitting cocktails is the norm. you may, in fact, wet your pants.

You’ll never see your friends the same way again.
Designed for four or more players, that's what she said takes 30-60 minutes to play. unlike other party games, all the cards within the game are designed to work together to maximize the evening's hilarity and minimize those awkward well-that-wasn't-funny moments. also, after each round, players can discard one card that doesn't tickle their pickle (that's what she said!) and redraw to keep their hand funny and fresh. the player known to be the kinkiest of the bunch is the first judge, and starts the game by reading a red setup card to the group, while the remaining players select the most inappropriate card from their hand for consideration. the judge awards the winner the red setup card as a marker, and the first player to collect five saucy setup cards wins.

- An outrageous party in a box, perfect for your next get-together or adult game night. It’s the board game equivalent of spiking the punch!
- Great for parties! Fast paced and hilarious on every turn—a naughty twist to Cards Against Humanity.
- This game is as dirty as your mind wants it to be. Play with different friends for wildly different outcomes!
- 458 Cards (400 White Phrase Cards and 58 Red Setup Cards) | 4+ players | 30-60 min | Ages: 18+

That's What She Said Party Game.

Use spaces to separate tags. Use single quotes (') for phrases.